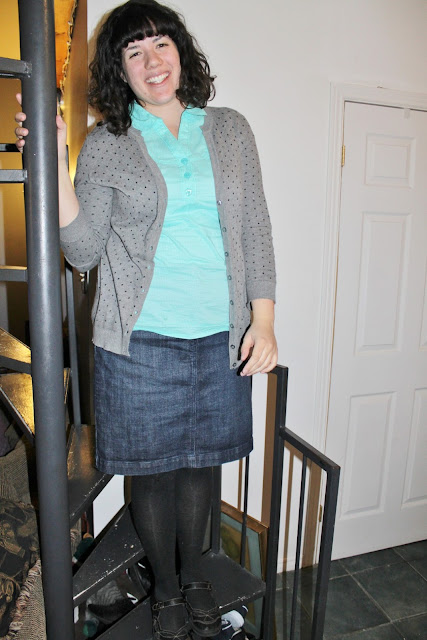 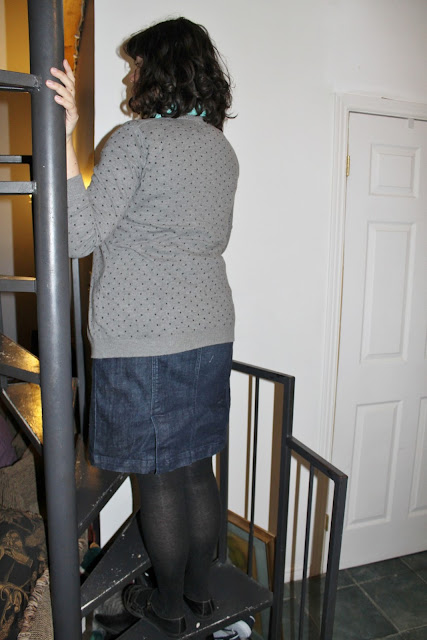 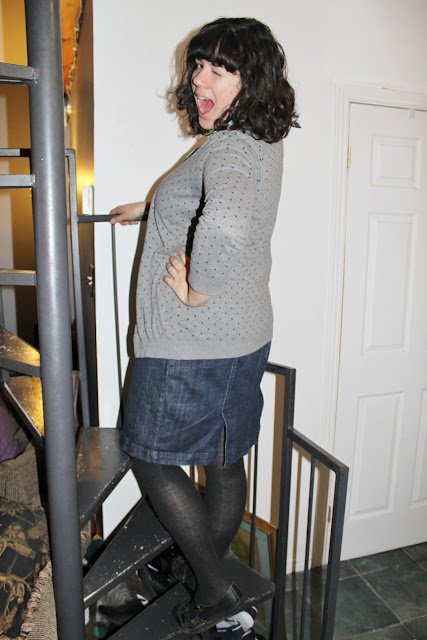 I picked up this cute  peter pan collar shirt and double kick-pleat skirt the weekend before last when I was shopping with my sister. I liked the idea of pairing this shirt with this cardi because the collar on the cardigan emphasizes the perter pan collar on the shirt. It was also a step outside the box for me since both items have prints on them, which you can't really see in the picture because the print on the shirt is small, but trust me it is there. I don't own a lot of clothing items with peter pan collars, but they are really starting to grow on me. I saw this shirt at the store and thought it was really cute, and the peter pan collar was an added bonus. I definitely want to get more in wardrobe which is why some of the dresses I am planning on making will include a peter pan collar. I really liked the skirt too because it has a double kick-pleat instead of just one like you normally see.

You might have noticed in these pictures that this cardigan is kind of an odd length. The arms were kind of short when I tried on the L at the store so I ended up buying an XL instead. But then the body was super long. It doesn't look too bad with this shirt, but it does look kind of odd with other things. To make a long story short I ended up putting it in the dryer after I wore it with this outfit, hoping that it would shrink a little bit. I forgot that I had done so until I was folding my laundry earlier today and noticed that the sleeves looked a little short. In fact the whole sweater had shrunk quite a bit. The body is a regular size, but the sleeves are more like 3/4 now than full length. Luckily I am okay with that since I end up pushing up most of my long sleeve shirts/cardis anyway. I was mostly just surprised by how much it shrunk! I have never had anything shrink that much in the dryer before, it was kid of crazy. I'll have to do some before and after pictures next time I wear it so you can see the difference.

P.S. I apologize if this post is rambling or doesn't make sense, I am typing it up a bit later at night than usual and I am tired. Our internet was down for a few hours, there was a huge outage in our area, and I didn't get a chance to write it up at a reasonable hour.