Bow-tie Wearing Pixies & Other Such Nonsense 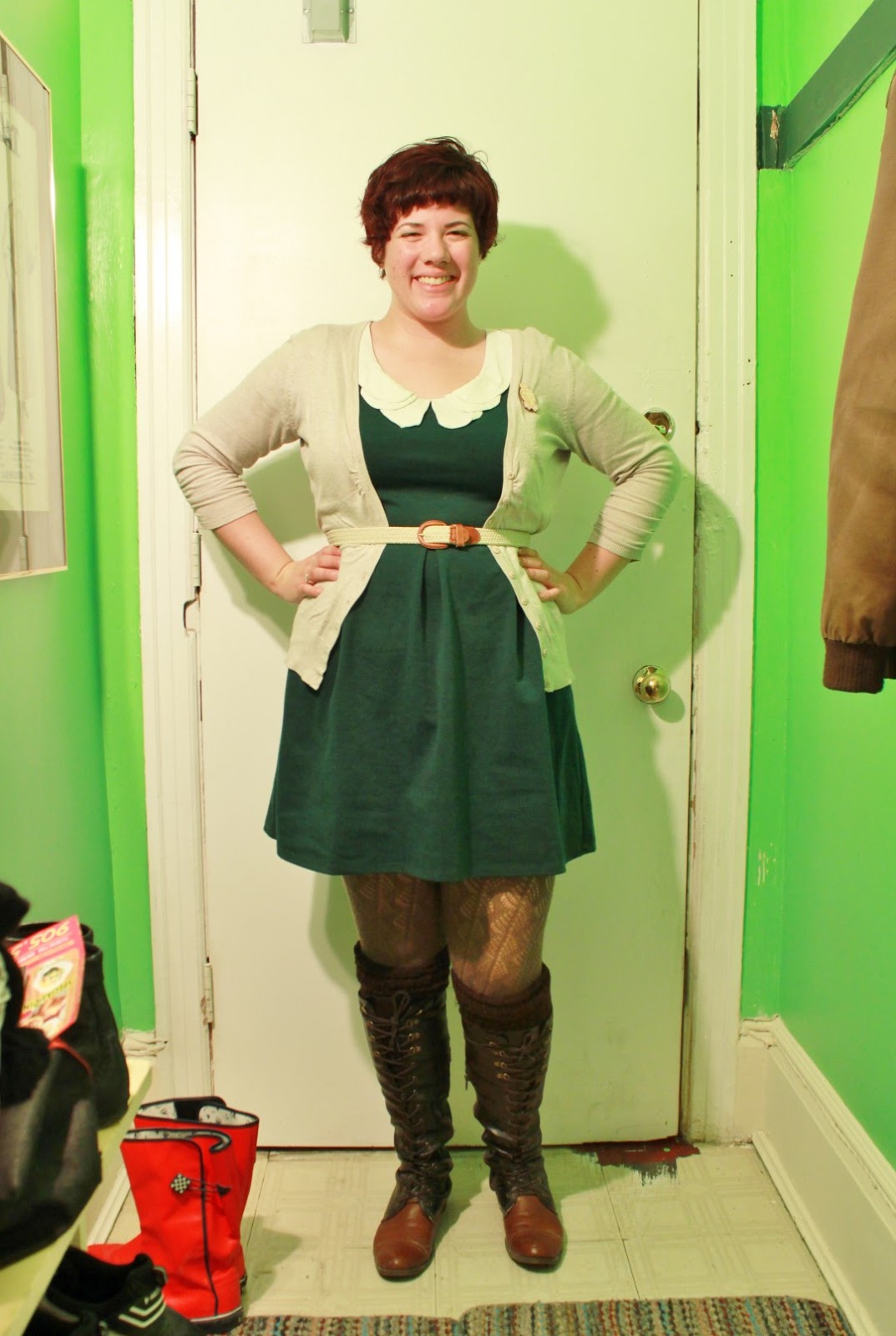 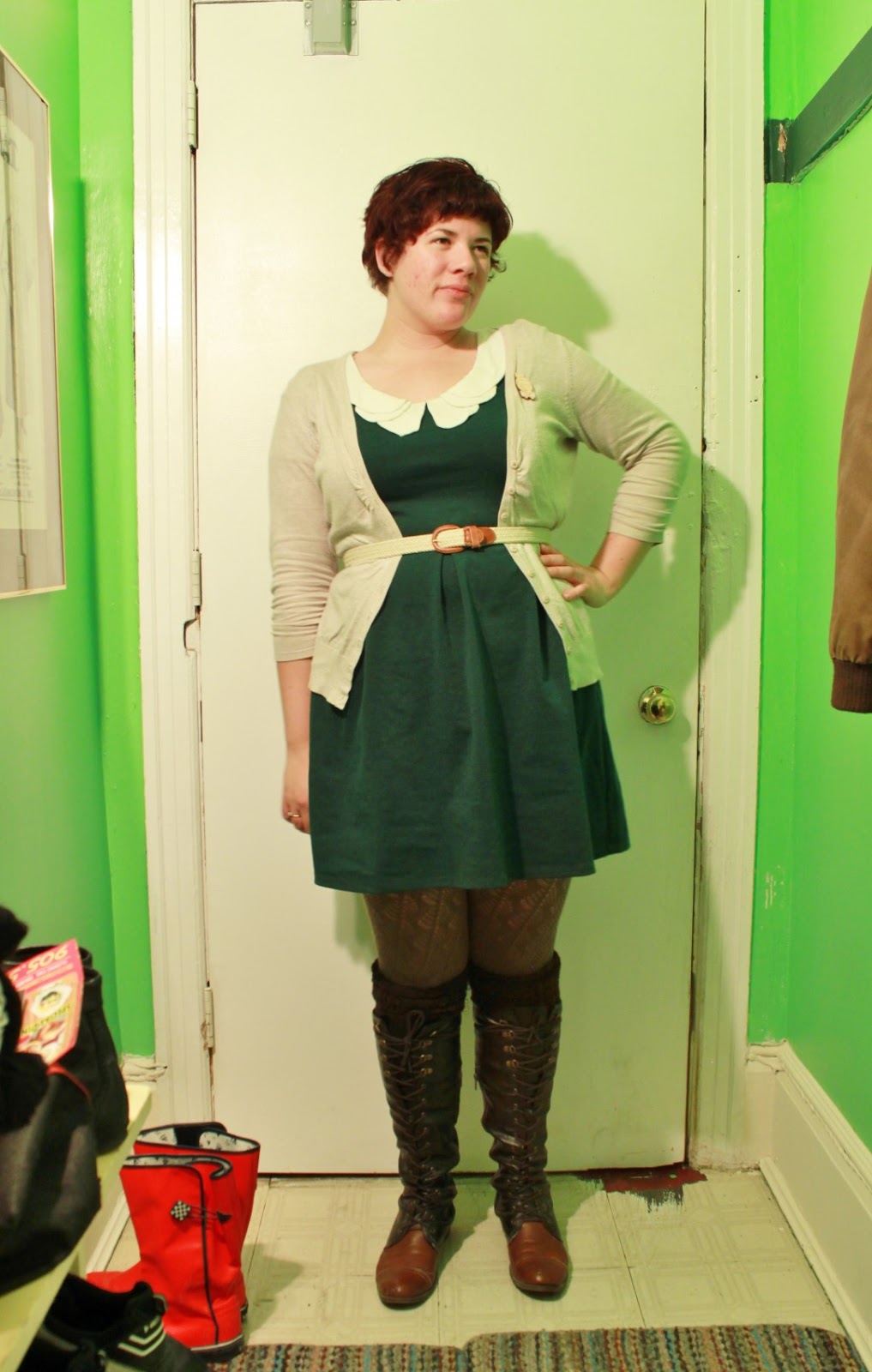 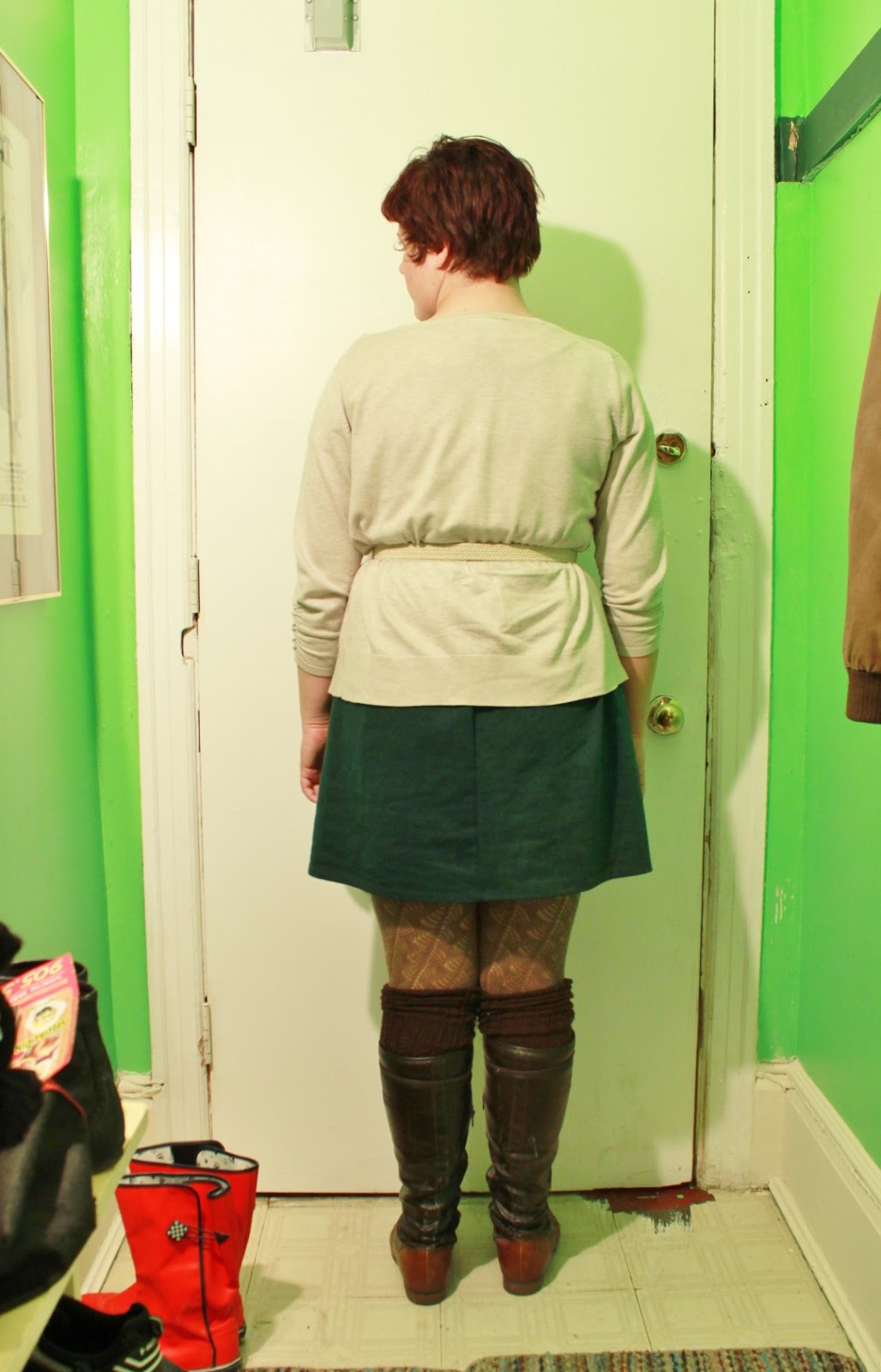 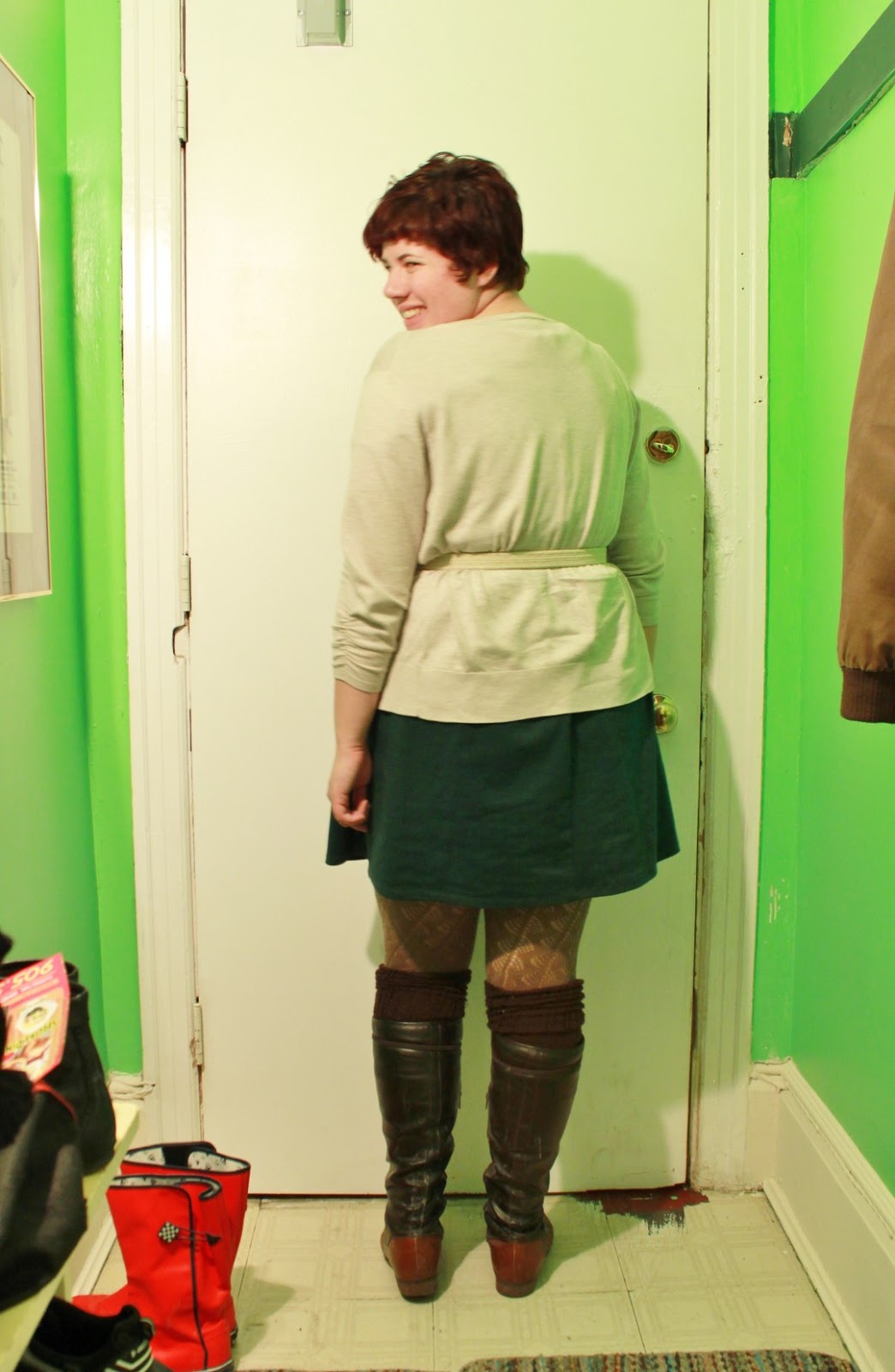 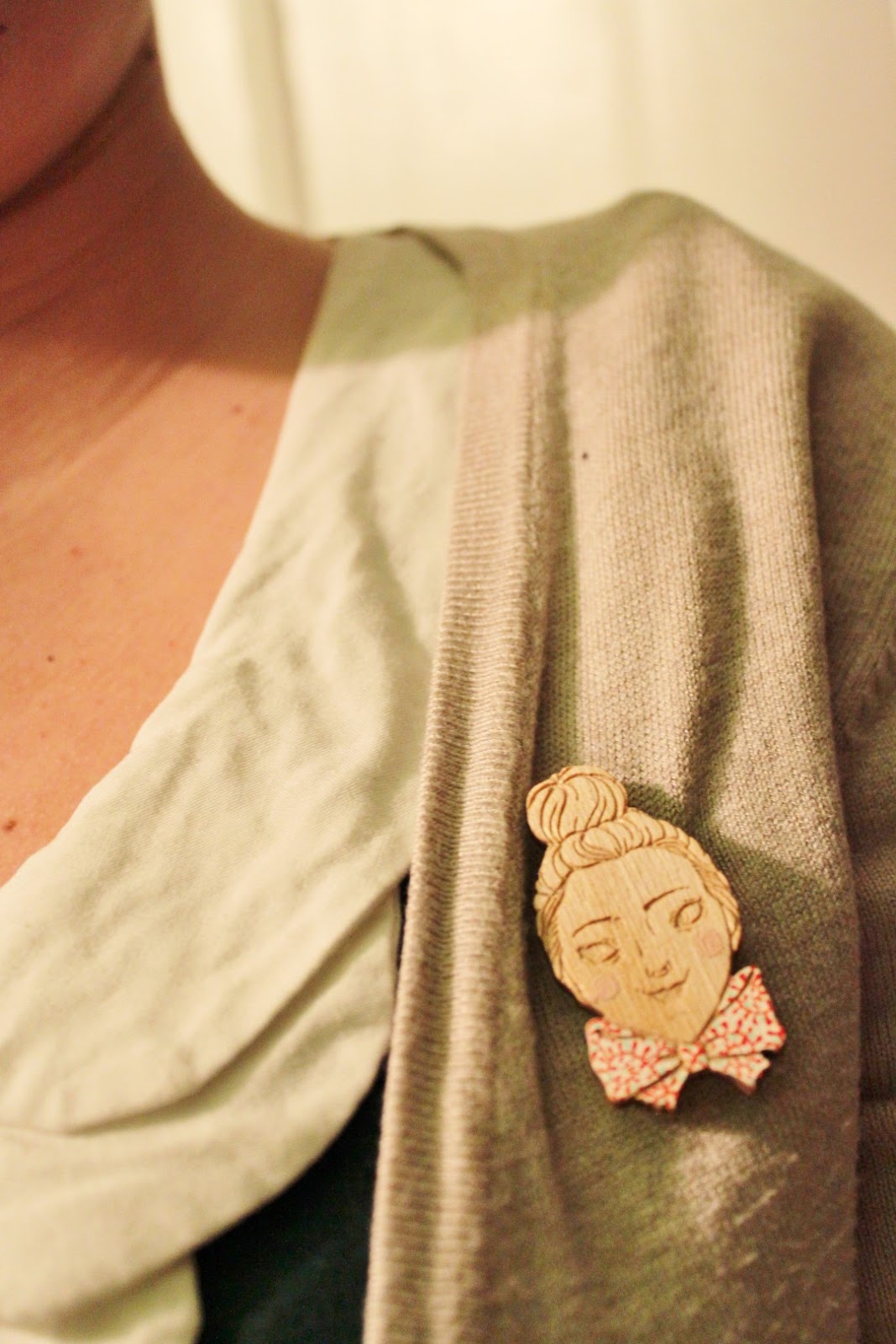 Do you ever go back and look through old outfit pictures and think "wow that outfit was really awesome!" ? Well that's how I feel about this outfit. I felt great while wearing it, and I look at it and get the same feeling. The pixie face of the brooch is a little creepy, but it doesn't take away from the overall effect, haha. This colour combination is something I would have never worn a few years ago. This blog has really helped me grow my personal style. I don't just think about wearing certain clothing combinations anymore, now I actually feel comfortable doing it. To heck what other people think. I want to feel good and look good in my own skin and clothing. This is one of the last archive picture sets I have to share with you, then I might actually have to take some current outfit pictures haha! The weather is finally starting to warm up here so I can begin to (cautiously) break into my spring wardrobe. I love being able to layer in the winter, but I am definitely ready to experiment with fresh new spring looks. How has the weather been where you live?
Posted by Hopefully Smashing at 01:39 5 comments

Email ThisBlogThis!Share to TwitterShare to FacebookShare to Pinterest
Labels: Thrifted, What I Wore

Saying Farewell To A Drooly Cat

Colin and I have lost another member of our little family. Monday at around 12pm we said goodbye to our lovely kitty Sable. It was sudden and unexpected and we already miss her so much. 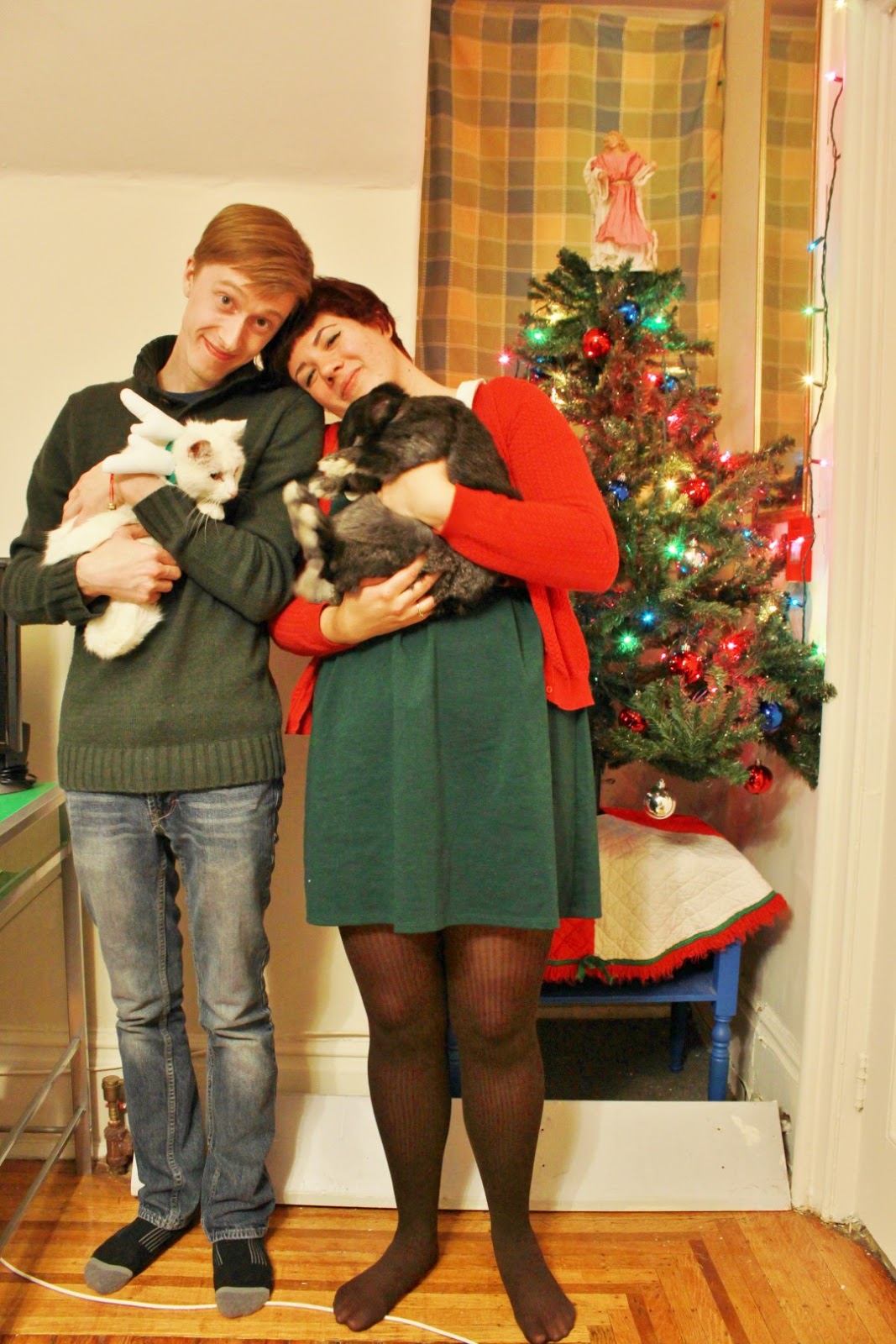 She was only a part of my life for a few short years, but she had been Colin's cat since she was a kitten. Him and his dad got her at a shelter when Colin was about 9 years old. I never met her as a young cat, but apparently she was quite the menace. If she was fed catnip she would run up and down the stairs in the house for hours. In the blink of an eye she would  run from the back door, through the kitchen, pick up a pillow and throw it in the air and run up two flights of stairs before the pillow dropped to the ground. Colin says that might have been his childhood imagination playing tricks on him, but that's how he remembers it. She also used to run along the back of the couch at full speed, not the top, the actual back of the couch. She loved to go outside and chase birds and hang out with other cats. I had never met a cat who drooled until I met Sable. It was a strange but endearing trait. 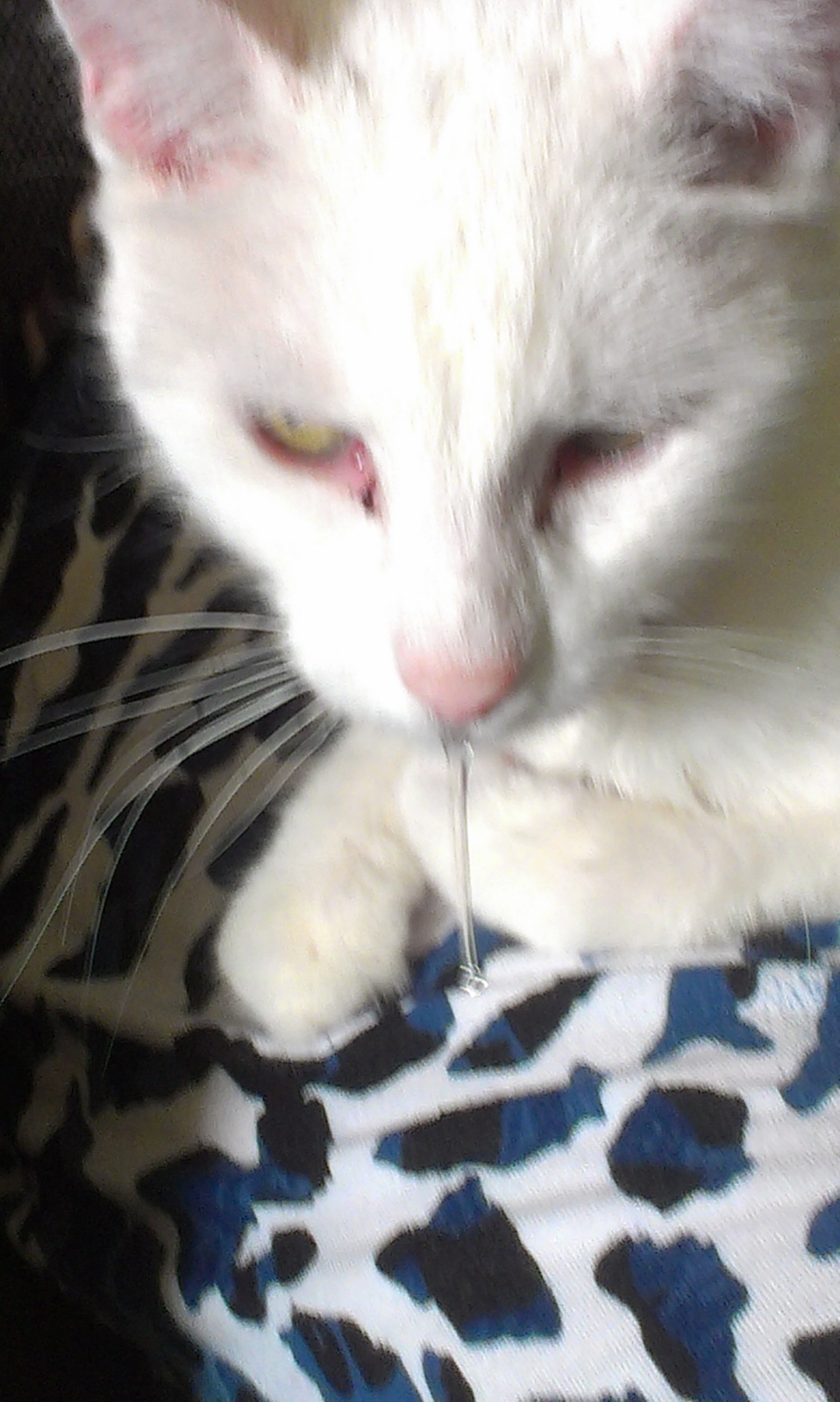 A lovely photo of Sable drooling while our friends were babysitting her.

Colin and I kind of inherited her when his dad moved out west last summer. We brought her with us when we moved, and I never regretted keeping her for one second. She was calm and gentle and loved to get her ears scritched. For a long time we though she was about 14, pretty old for a cat, but we found out from the vet that she was actually about 16 years old. 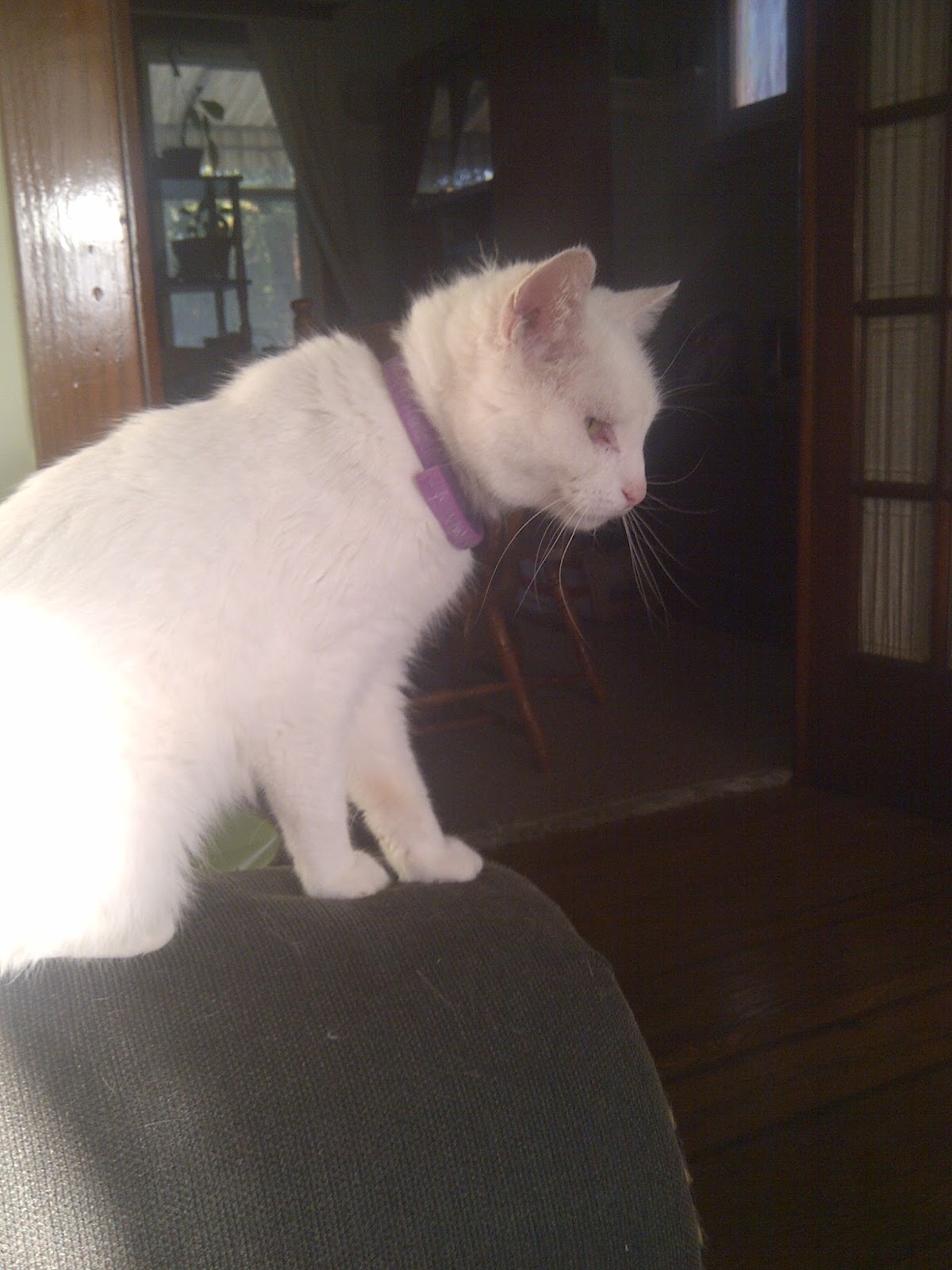 It's always so hard to say goodbye to someone you love, but she hadn't been in top shape for a little while and I think she is in a better place now. She had a good life, and I like to think that we made her last year extra special. I love you and miss you you drooly cat, I hope you are frolicking in a field where the hills are made of wet cat food and the grass is full of cat treats and there are plenty of (clean) toilets to drink from. 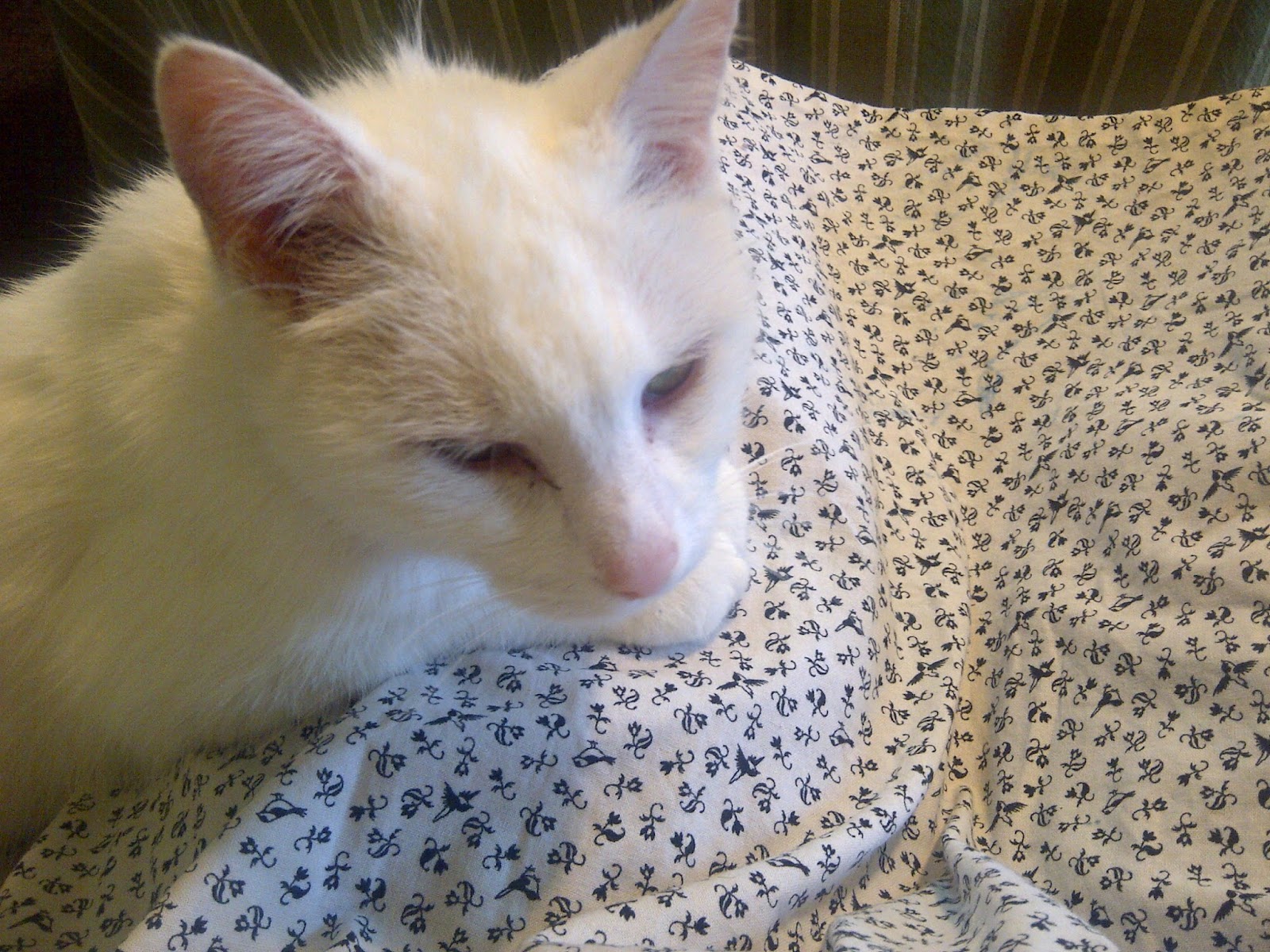 Posted by Hopefully Smashing at 09:00 1 comments 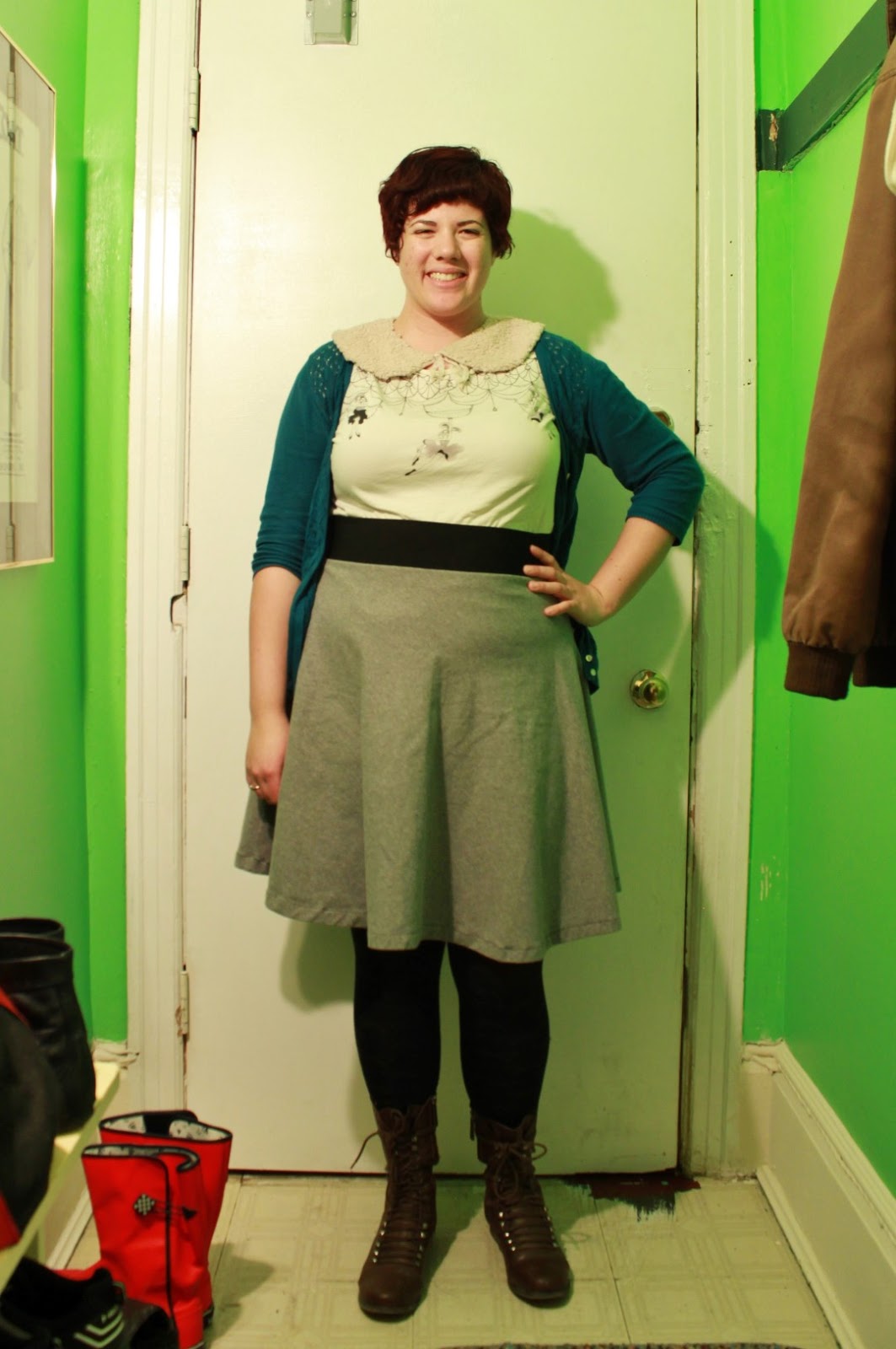 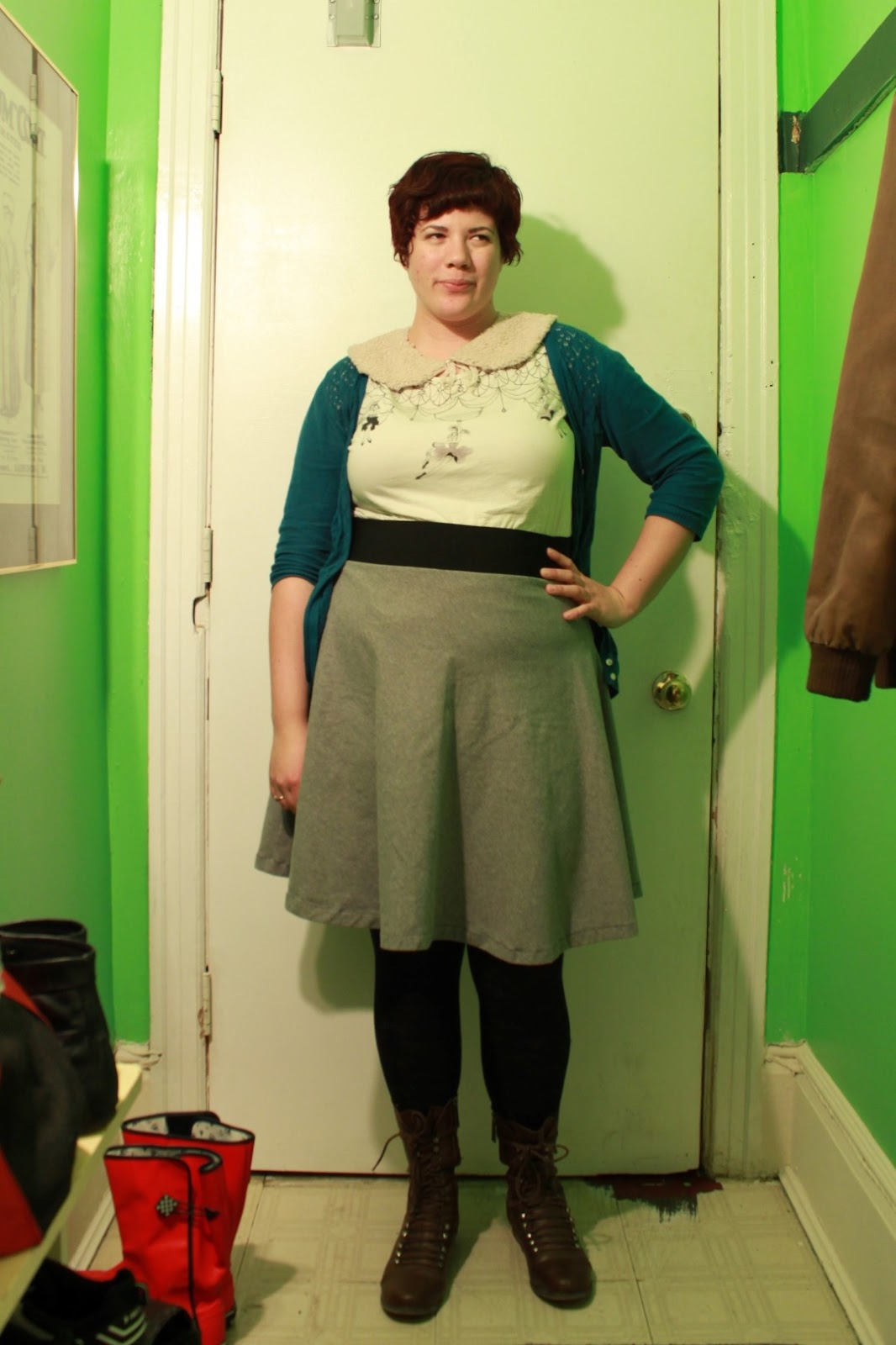 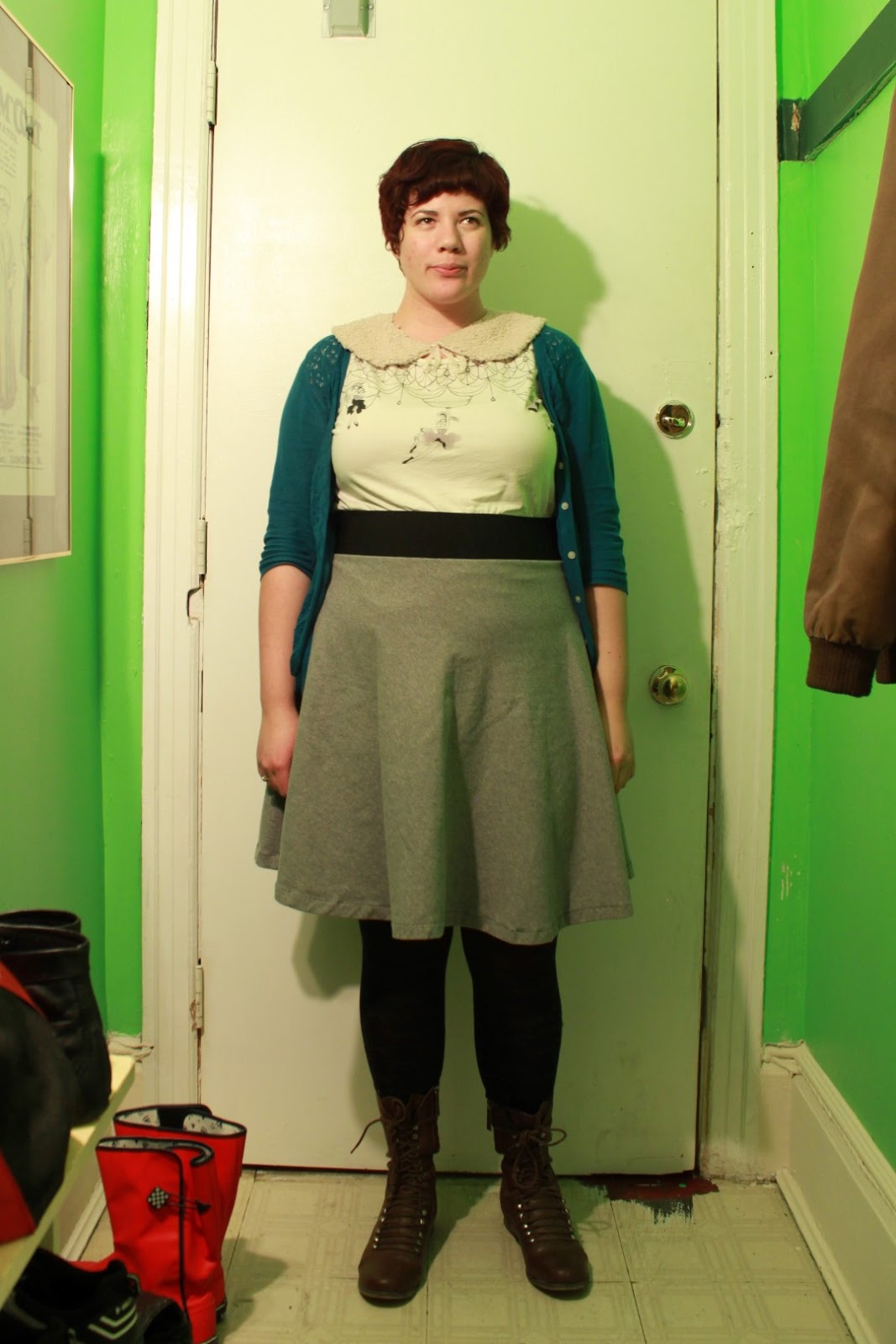 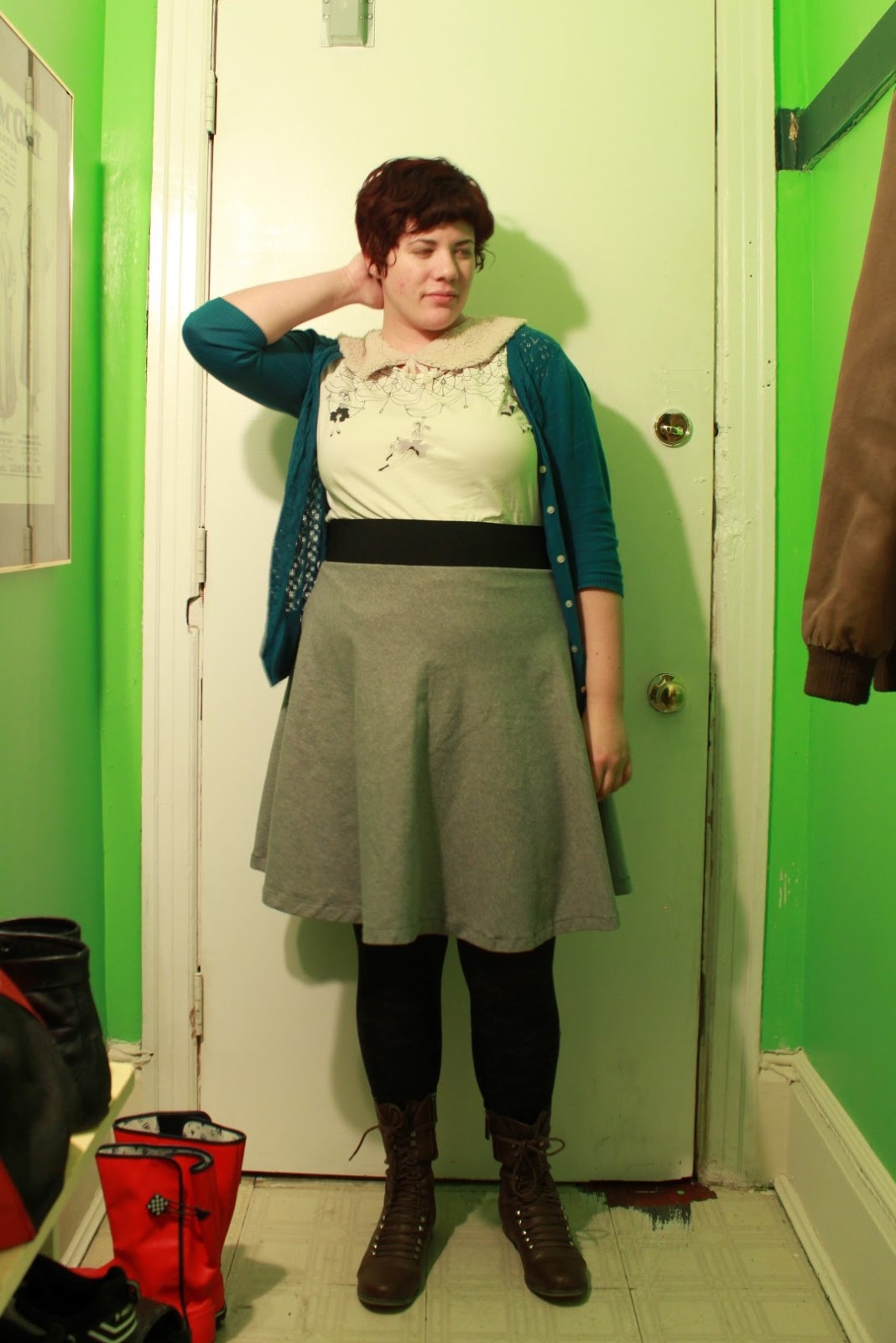 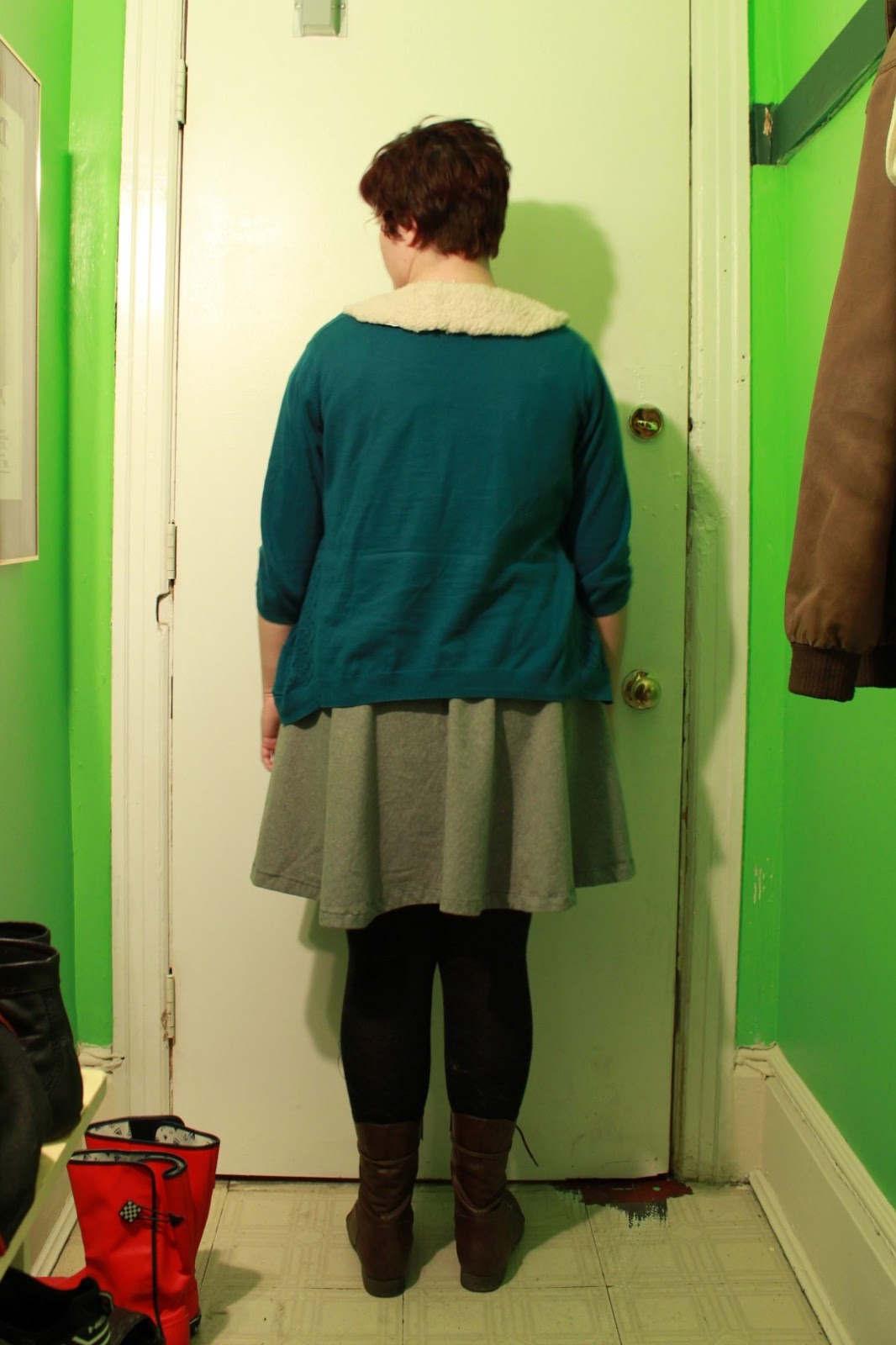 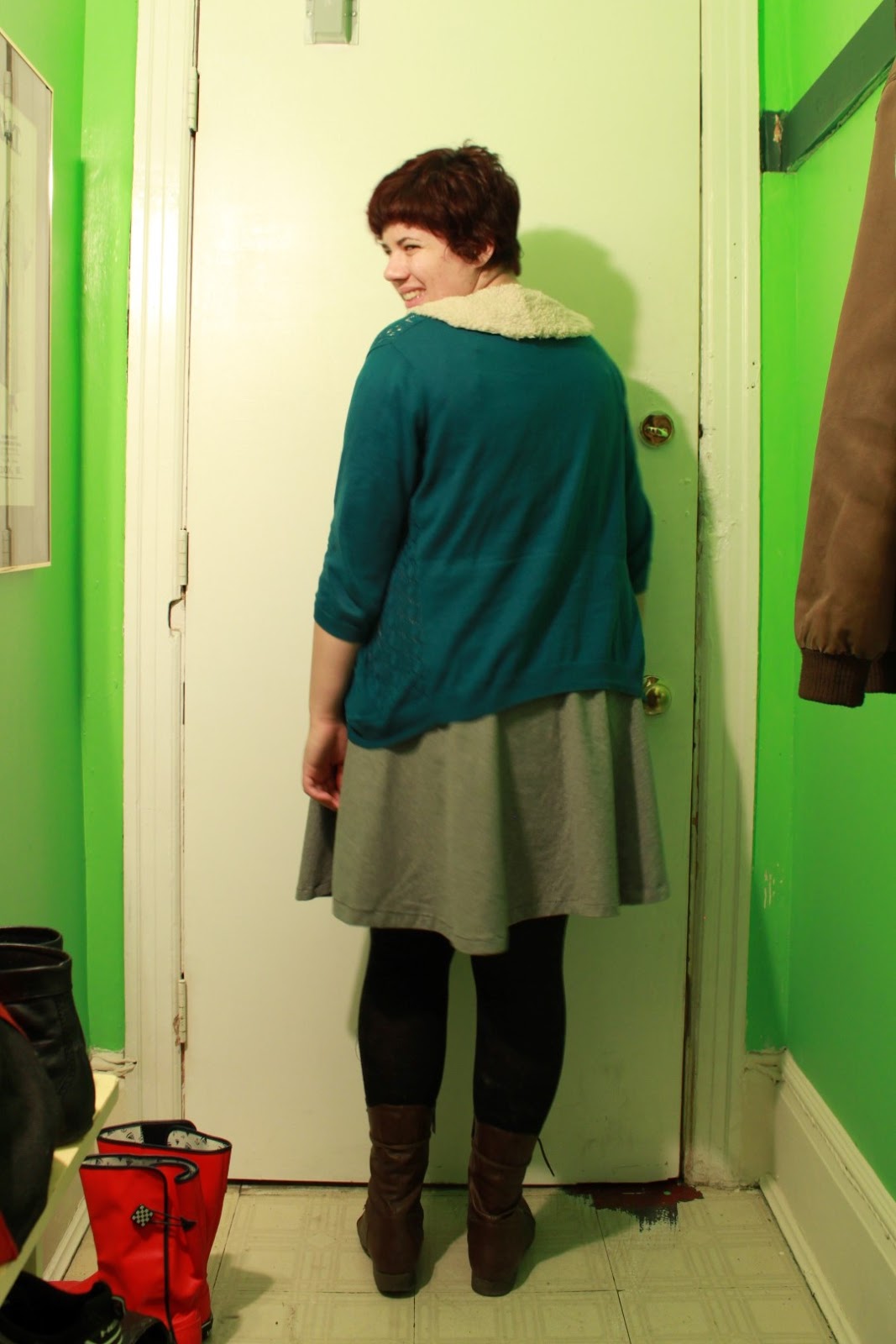 What I Wore:
Shirt: Present from my sister
Collar: Clothing swap
Cardi: Smart Set
Skirt: Made by me
Leggins: Suzy Shier
Boots: ModCloth

Still digging in the archives of outfit pictures, this one was from mid-February. Sadly the weather here is just starting to creep above freezing so I am wearing clothing pretty similar to this still anyway. Actually the last few days have been quite lovely, I can't wait until it is truly spring, it's been a loooooong winter. Life has been pretty crazy lately, the usual business with work and whatnot so I haven't had much time to post again. Sometimes I really want to put up some outfit pictures without saying anything, but that feels wrong since this is suppose to be a blog not just an image dump. I might randomly put some things up on tumblr on days where I feel like that but I'm not sure yet. This is turning into a super boring post so far haha.

I really like this furry collar and I feel like I need to wear it with more things. I just need more extra collars in general. I actually have a pattern from Simplicity that is all collars, but I made one of them and it fit my neck but it sit us really high so it doesn't really look right when you wear under shirt/dresses etc. I didn't make the flatter style ones like the one in these pictures though so I might have to give that a try. I could also just make my own pattern if I really wanted to, but sometimes I am super lazy. Draping collars was never my strong point at school, so actually that might be a good thing for me to work on anyway. How have you guys been?

Posted by Hopefully Smashing at 01:47 2 comments

Email ThisBlogThis!Share to TwitterShare to FacebookShare to Pinterest
Labels: Hand Made, What I Wore
Newer Posts Older Posts Home
Subscribe to: Posts (Atom)