Last week I left off with having the shirt sewn together at the shoulders. Here are the next few steps in the construction process. 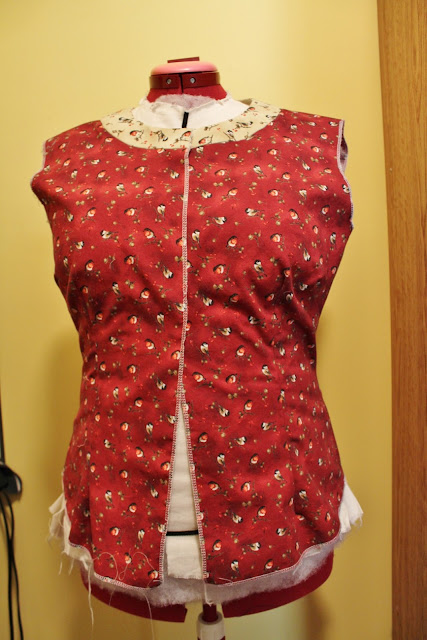 8. The first step was to sew the side seams together. Then I hemmed the bottom of the shirt. They allowed for a 5/8" (1.5 cm hem) so I measured that out, folded it, pressed it and sewed it. This was a relatively easy and quick process. 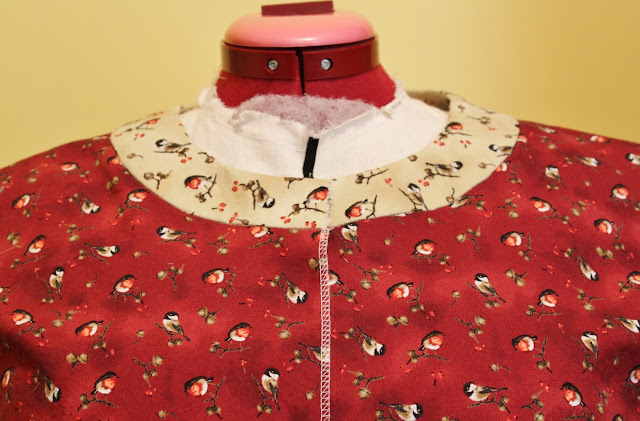 9. Next I worked on the collar pieces. I sewed the front two pieces to the back one. I had to do this twice because there is the outer collar that is visible in this picture, and the inner collar (called a facing). After the pieces were together and the seams had been pressed I attached the outer collar to the neck edge. This was probably the worst part of constructing this shirt. Because of the curve of the neck it was fussy to pin and the collar didn't want to sit right. It took some patience (and possibly some swearing on my part), but I finally got it in. Once the outer collar was attached, I pinned the facing to it at the top edge. I sewed them together,  turned the facing in and then stitched it down from the outside. 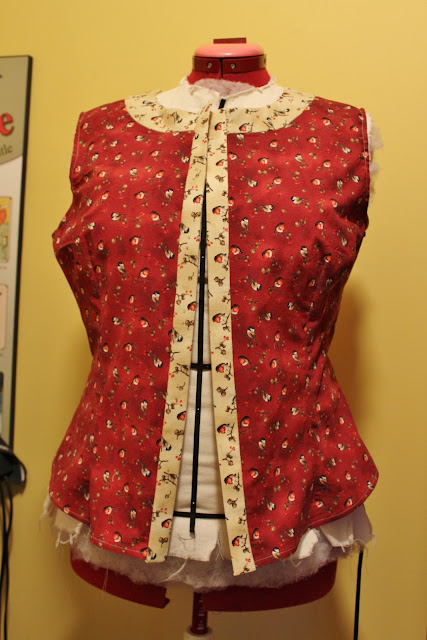 10. Once to collar was attached I hemmed the armholes. I used the same method here as I did for the hem at the bottom of the shirt. You were supposed to use bias tape, but I liked the idea of the arms looking like the hem, I thought it would balance it out.

11. Next I worked on attaching the front facings (where the buttons are going to go). There are two facings so I had to do the next few steps twice. First I took one facing and folded it right sides together, folded one edge up 3/8" (0.8cm) and pressed it. Then I sewed the top and bottom edges shut,turned it right side out and pressed it. This was repeated for the other facing piece. Then I pinned the non folded edge to the front of the shirt and sewed it. Last but not least I pinned the inside of the facing down from the outside (like with the collar) and sewed it down from the outside.

I didn't take as many pictures this time because it seemed like I took way too many last time. Now I realise that I probably should have taken some of attaching the facings because the instructions seem a bit confusing just reading them out. But hey, that;s partially why I am doing this project. It is a learning experience for me and you :)

Overall this piece was relatively simple to construct. I am actually all done the project now, I finished it up yesterday, and I will do the big reveal next week!
Posted by Hopefully Smashing at 16:33