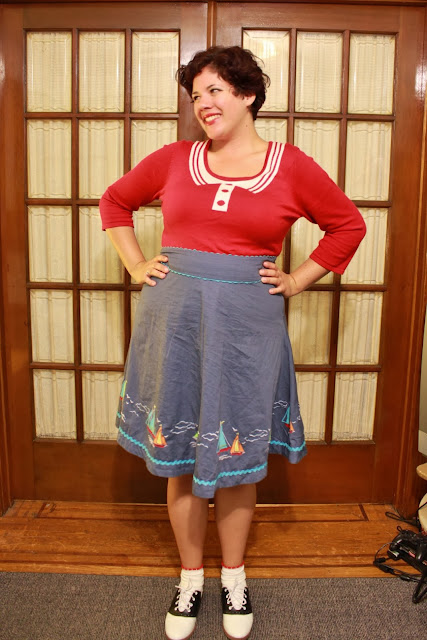 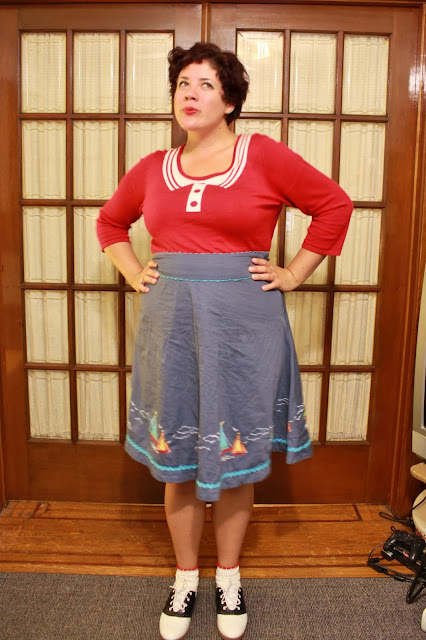 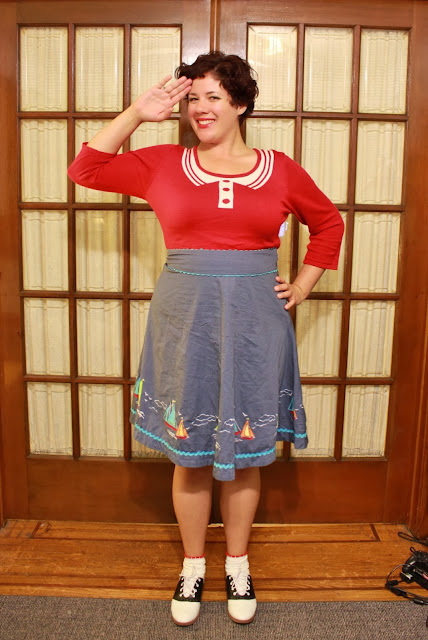 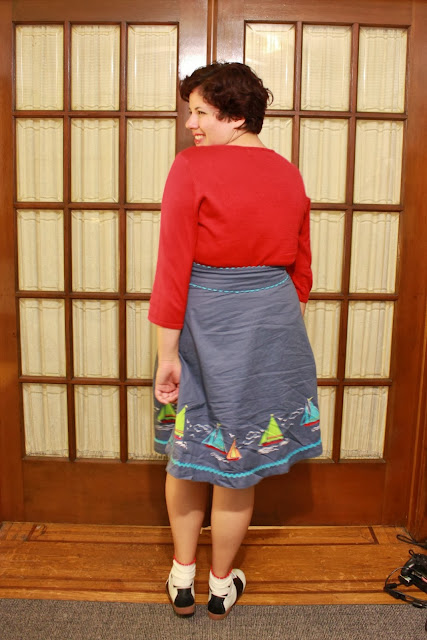 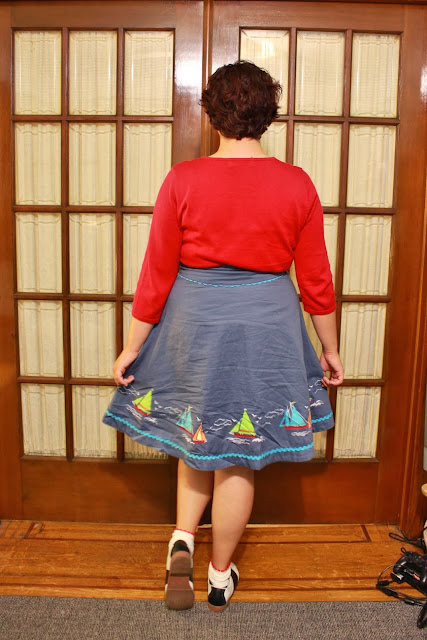 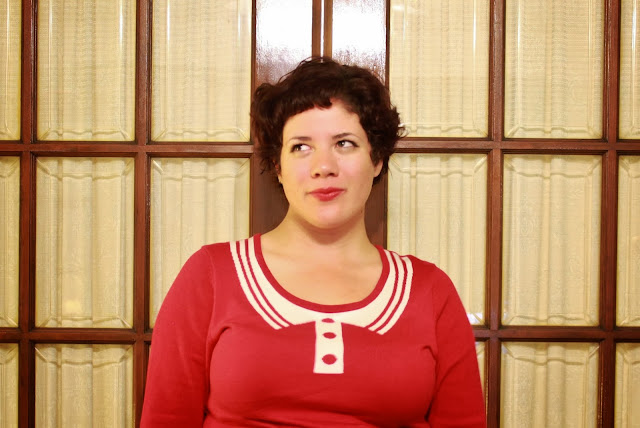 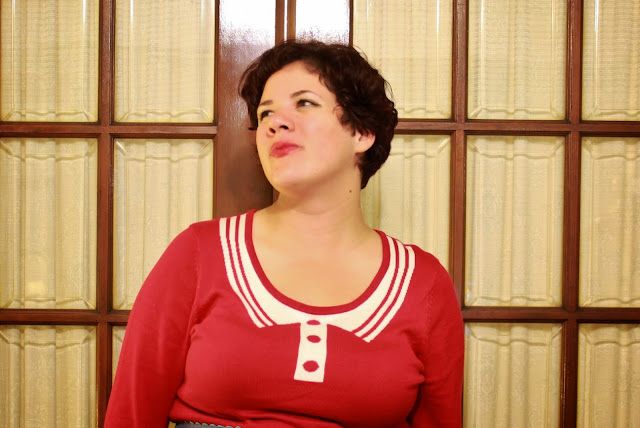 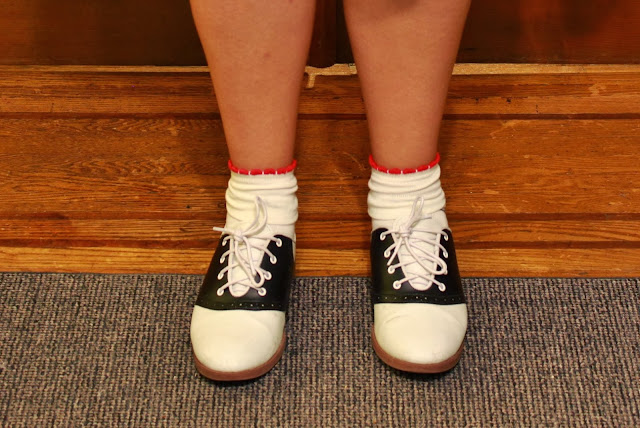 What I Wore:
Sweater: Oblige
Skirt: Thrifted (Out Of The Past)
Socks: Ardene
Shoes: Payless

I swear to goodness this skirt was not this wrinkled when I put it on in the morning. It's just one of those skirts that gets progressively more wrinkled throughout the day. I also wore it to work for an 8 hour shift so you know that might explain it too. I got this sweater the other day while I was taking a detour through the mall around 6pm to get to the bus station. All the stores were closing (because Jackson Square has stupid hours), but this place had a mega sale on their clothing and the sweater was marked down from $39.99 to $14.99! I have been trying to cut down on my spending lately and have been doing a pretty good job, but this sweater was too stinkin' cute to resist. It is definitely a great addition to my ever increasing nautical wardrobe. I feel like at this point I have enough to probably wear all nautical things for at least a week, maybe more. I think I have a problem.

I worked my second shift at my new job yesterday and I am really enjoying it so far. There are two different sites and the second one is so beautiful! The leaves are just starting to turn and I can tell it is going to be amazing once it is fully fall. The end of the day kind of sucked though. Colin and I were supposed to meet up with someone to view an apartment after work. I had to take the train home so I was going to just go straight to the place. I got into town and had a little bit of extra time so I got some food and then started to head over to the place. I tried to text Colin because he didn't know the address, but he wasn't responding. Then I tried calling, but I kept getting disconnected. Then I tried restarting my phone thinking it might be a signal issue from the train (it has happened before). Nothing. Next I tried a payphone (when the heck did they go up to 50 cents?!) but all I got was a busy signal over and over again. I decided to just go over to the place and wait there. I then proceeded to restart my phone a few times, send several texts and send an e-mail, all to no avail. At this point I was starting to panic. I waited until a little after 8pm and the landlord wasn't there yet so I walked up the street a few blocks looking for Colin. On the way I had learned from a passerby that the Rogers network was down in the city. Well, that explains the lack of contact, but man oh man what a time for that to happen. The one time I don't obsess about making solid plans. I finally found Colin who had just gotten downtown. It was a complete fluke, but I was relieved. He had also been trying to contact me for ages, and I explained about the phones being down. We walked back to the apartment and waited around for another 40 minutes but the dude never showed up. One of the tenants came by and offered to contact him since her phone was working, but he never responded. I am not sure what happened, probably something to do with the network being down. I am a little disappointed, mostly because it took forever to set up this appointment, and I hope he didn't come and go in the 5 minutes I was gone. Fingers crossed that we can schedule another time for a viewing. Apartment hunting can be really frustrating at times, but Colin keeps telling me to think of it like a treasure hunt so I am trying really hard to look at it like that. Does anyone else have any apartment hunting horror stories?

P.S. I cut my own hair last week, what do you guys think?
Posted by Hopefully Smashing at 09:00

Email ThisBlogThis!Share to TwitterShare to FacebookShare to Pinterest
Labels: Nautical, Personal, What I Wore