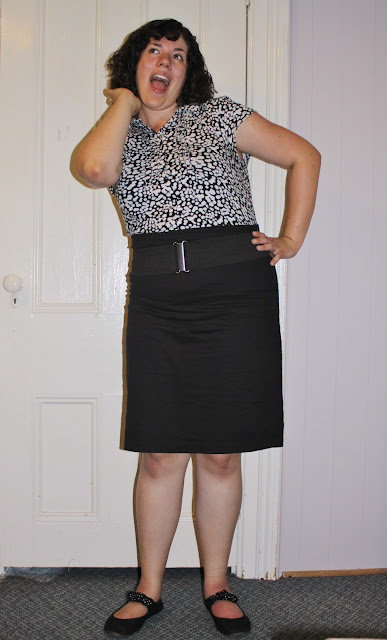 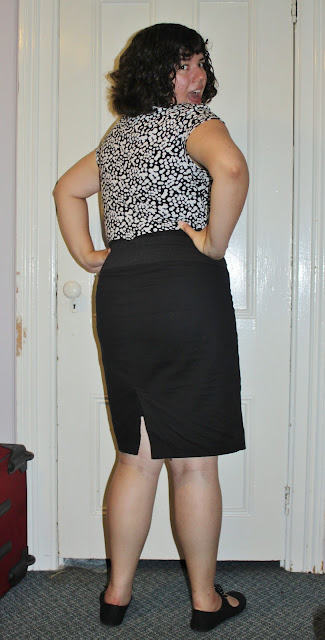 In anticipation of The Nearsighted Owl's I am Proud of My Size linkup I have included my size in this post. once again I would like to say that I love participating in this and admire Rachele and the other ladies that have been working on this every week.

I had a phone interview today (so I decided to wear interview clothes to work even though they couldn't see me, weird I know) and I was super nervous until after it was over. I really dislike interviews, I always get so worked up and then stumble on my words. It is like herding cats trying to get my thoughts in order. Then I analyze everything I said afterwards and come up with really good answers that would have been so much better than what I managed to get out. It was also super awkward because they were writing down what I was saying so there were long pauses full of silence. I'm sure if I had been in the room it would have been a little better, at least then I could have judged their reactions. They always ask you situation questions too, which I sometimes find really hard to answer. If it happened I would be acting in the moment, and I would be able to judge all of the details of the situation to determine a solution. But you don't get all the facts with the interview ones and then I have to wrangle a generic answer. I think it went pretty well, and I am really grateful to have had an interview. If I get the job I think it will be a super fun place to work. I will find out next week, so fingers crossed.

On another note, I really need to get a haircut. I have been putting it off because I wasn't sure if I would be going back home or not (as of right now I probably will be moving back to Ontario), and I usually get my hair done at the same place. It sounds silly, but my hairdresser really knows how to deal with curly hair, and not all of them do. I have had some horrible bowl/trianlge shaped hair cuts in my time. Or people who have attempted to put a straight-style do on my head, which never ever works. I was thinking of something like this:

but with shorter bangs. I haven't gone that short in a while, but it is so much easier to deal with short hair, and I can make it as giant as I want (or it can be as giant as it wants, it has a mind of its own) and it still looks decent. I still have some time to mull over this, but I want to get it cut soon after I get home.

Posted by Hopefully Smashing at 18:47

Email ThisBlogThis!Share to TwitterShare to FacebookShare to Pinterest
Labels: I'm Proud of My Size, What I Wore